The safe and space-saving way to store and charge e-bikes. The green facade improves air quality. 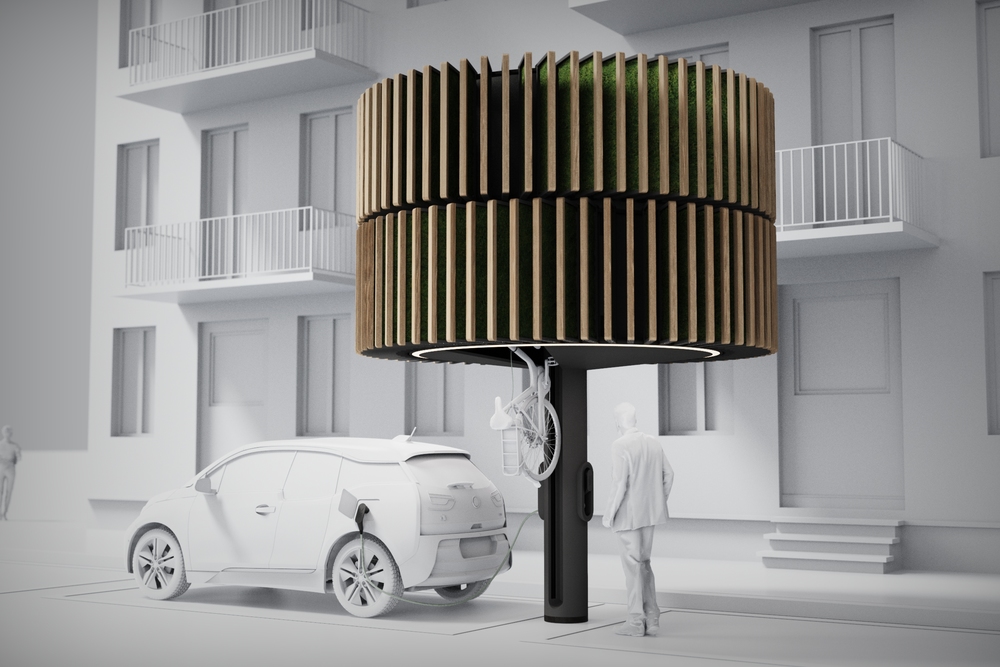 vtree is a new, space-saving way to safely park and charge e-bikes in cities. The bicycles are no longer stored on the ground, but radially around a stem, which is at a height of 2.3 m and thus takes up almost no space at the ground. The bicycles are encased in a lamella structure, which is covered with mosses, which simultaneously filter carbon and fine dust from the air and improve the air quality in cities. vetree can also charge two e-cars, wich can be parked underneath.

The project vtree arose due to the rapidly increasing sales of e-bikes, the increasing prices of these and the lack of charging or storage infrastructure. Bicycle parking facilities in cities are usually overcrowded due to lack of space and are also insufficiently protected against vandalism and weather. vtree solves these problems. In order to minimise the parking space, the bicycles are lifted up by an elevator and stored horizontally around a stem. A shell covered with moss protects the bicycles from vandalism and weather influences. Various types of moss are distributed on modular slats in a fan-like manner around the entire diameter. Thanks to the slats, the surface of the greenery can be increased up to 85 m2. Compared to an ordinary tree, vtree is able to extract 13 times as much carbon and 181 times more fine dust from the ambient air. The bicycle tree can easily be placed between two parking spaces and can also be used as a charging station for two electric cars.

We designed a solution for the rising trend of e-mobility, more precisely, the trend towards expensive e-bikes and the charging and storing them. Furthermore, we designed a space-saving parking solution which simultaneously improves the air quality in cities.