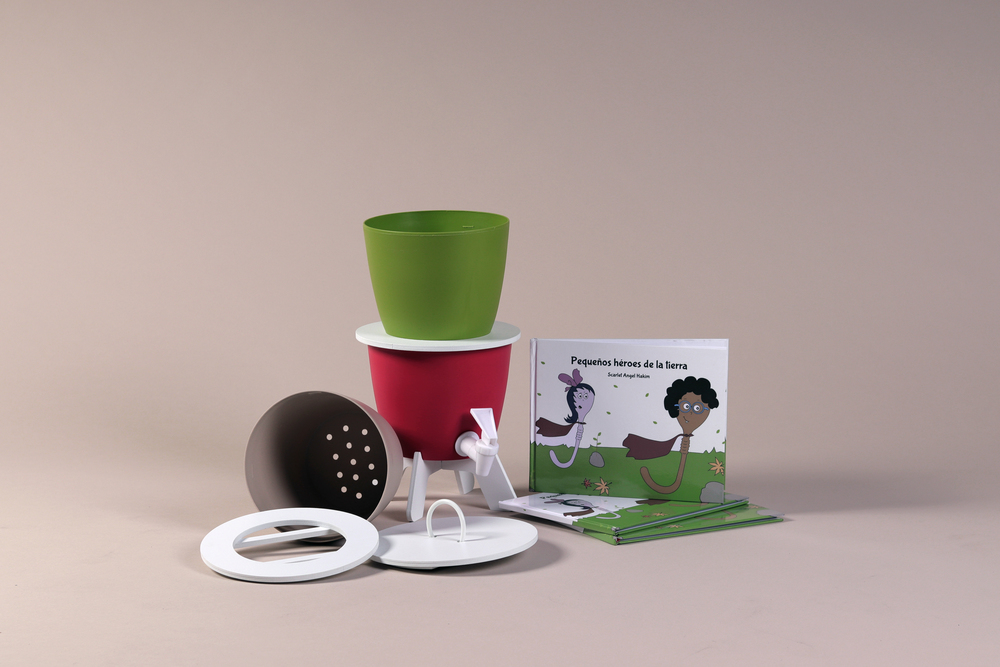 This project provides an environmental education in a didactic and active way especially for children from low-income communities in Mexico. Since there is few knowledge of organic waste management and poor understanding of it’s potential, the solution is to change the mindset around the concept of garbage through a compost bin and a story which show that what we throw away has value, which can be used or transformed into new resources. In this case, on nutrient-dense soil through vermicompost.

The final product consists on an educational kit, which has two complementary elements for the fulfillment of the proposed objective to solve and approach the main problem. 1. An informative and interactive story- A cue to enter the world of composting: how does it work, how can it benefit our everyday, and the value of composting. It includes an activity that gives guidelines and motivation points so the kids keep composting their organic waste as time passes, by making it a habit. This final activity is called “Hero’s certificate”. 2. Educational compost bin for children- They will learn in a practical way to assemble and generate their own compost, taking advantage of their organic remains with the reintegration of soil into the earth. The compost bin will help them understand through experience how does this natural process works and what are the steps or layers in vermicompost. The “magical” process is demonstrated.

This project addresses a different way of empowering children to be part of small changes that make big differences by understanding the process of composting and changing the idea that whatever they throw away is useless garbage. This solution is meant to unchain other environmental values and a higher capacity of looking at things differently to solve other problems. Designing for children is an important part of the project because they need to know that there are problems of which they themselves are part of and that they have the ability to be the engine of change needed.

There was a complex process where field research had to be done. Activities were made with children of some communities near Mexico City to understand their context and basic knowledge about environmental issues. As a part of the field research, I also made prototypes with different materials and didactic performances that allowed me to understand how some design agents would influence directly in the process of composting, always taking into account that the product had to be simple.

At the moment I’ve given workshops in four communities working alongside Nutre a un Niño using the educational compost bin, and the book. Nutre has adopted it as an integral part of their educational program with over 40 communities. I’ve also given other workshops with Social Design HUB in CENTRO for adults and young people. The workshops consist on the following activities: 1.Read the story, each has a printed copy so they can see the cartoons and associate the words, with the colors and actions. 2.Based on the information the story tells which has a connection to the way the compost bin is designed (colors, forms and assembly) they learn and do compost by arranging each layer of the compost bin. 3.Fill in the Hero’s Certificate, they put their names on it and draw their goals each time they accomplish them as time passes, giving the project continuity.

The impact- when both a theoretical and practical approach are taken at the same time- , raises awareness of the actions and consequences, either negative or positive, in children’s day to day by becoming more real and less distant; creates a network of empathy for the natural environment and those that inhabit it; and helps understand through experience the importance of taking the resources we dispose as valuable materials to act differently and make our environment a healthier place to live in with a higher level of personal satisfaction.