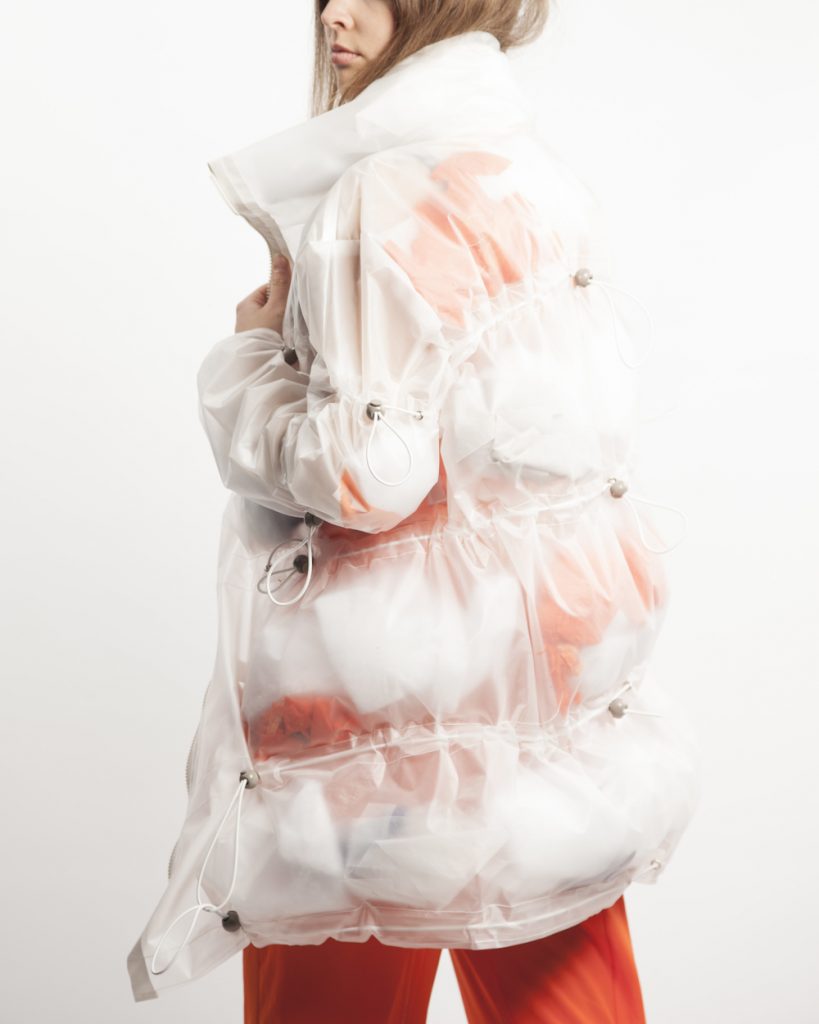 The project consist in design a system applicable to the development of a fashion collection, in which the consumer is the active entity of the process and the main responsible. This consists of the introduction of all the waste generated in the production process of a specific garment in its own sale. This system includes a useful possibility to manage all this accumulation of waste, making them partakers of outer garments as substitutes for fillings and wadding.

The generation of waste is daily and constant, at the height of a demand for frenetic consumption and without rest and the power to curb these excesses or to continue accelerating the process is up to the consumer. “Mama” was born from the idea of materializing the gap between our consumption habits and its real impact on society and the environment, taking as its objective to provide physical body with the generation of waste produced by the textile industry, as well as to hold the consumer responsible of said excesses.The project explores the concept of “womb” as an organ of creation and gestation of something concrete, which introduces ideas of affection and protection between the subject and the object. This is intended to create relationships between the garments and the user, in order to extend the useful life of the objects and reduce their consumption. The idea of ​​“filling” is worked on, with which it is proposed to give a functional return to the surplus as a useful matter.

The concept starts from the idea of ​​materializing the void, taking as an example the concept of “cloud” of the internet. Being a concept developed in a virtual environment, it is very difficult for the consumer to provide a physical body with the infrastructure that hides, which at the same time produces a great environmental impact – much more difficult to assimilate. This emptiness as an ability to imagine the real consequences of the impact of our acts is easily associated with that of the fashion industry.

For the average consumer it is so difficult to imagine which hand has produced his shirt as where the hard disk containing his instagram is. The consumer, instead of paying only for the final result, it does everything that it generates. With this, we activate two reactions: on the one hand, upon receiving all the material that has created the product, the approximation to the value – both economic and symbolic – of the piece becomes visible; on the other hand, it is the user who decides what to do with all this, how often he wants to accumulate it, or what he can transform it into, establishing the circular link here. However, this system would be deficient as a design if it did not offer a useful possibility to manage all this accumulation of waste. To this end, a collection formed by interiors and exteriors has been developed, produced by means of the conventional cutting and sewing system, with the particularity that no fillers or wadding were included in the pieces of coat. These will be replaced, at the user’s discretion, with the waste received with the purchase of other garments.

For the design of the collection the pieces have been worked without the limitation of reducing the waste by means of the pattern. This allows to work volumes and silhouettes with greater freedom, accommodating pieces with large volumes, collected through sets of rubber bands and gathers. The silhouette is generally sporty, enhanced by the use of technical materials and knitted fabrics, such as plastic and elastic tulle. Materials that, at the same time, have been chosen for their light structure as long as they can function as filler. The use of color is reduced and controlled, allowing different materials to interact with each other.