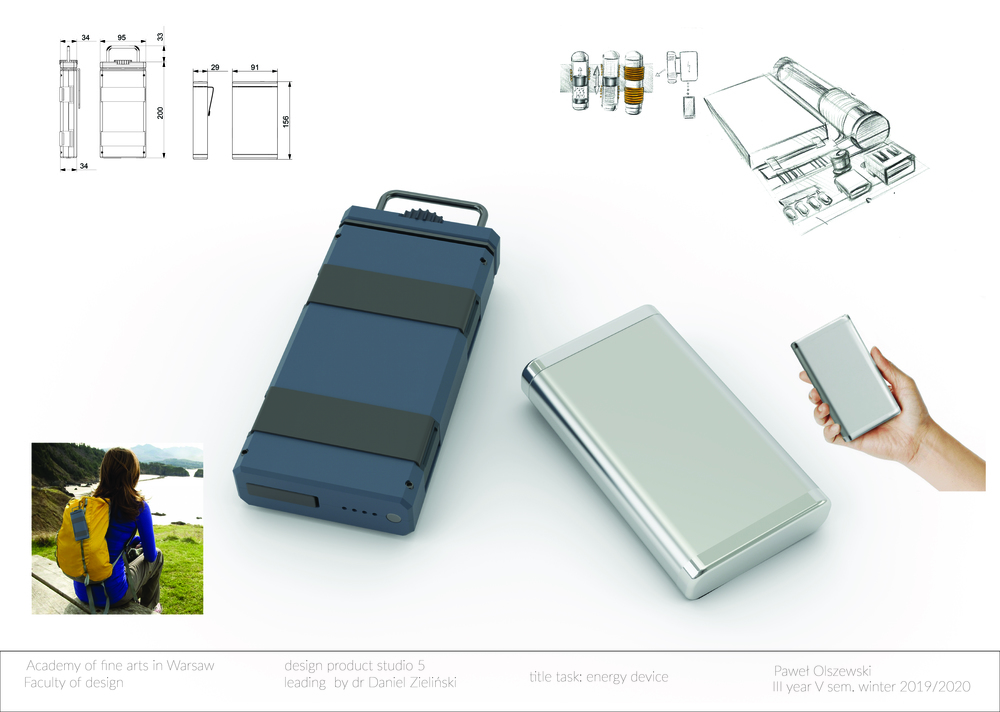 This primary aim of the solution centers around a mechanism from induction flashlights which work without battery. I modified this idea and added a second magnet which is damper, and repels the first magnet when a person walks with a power bank in their backpack, for example. Powerbanks have elements which are able to better move (hook to hang device on pocket in pants or backpack pocket, staple and rubber strap to keep smartphone to device or put device to bike frame). The second aim is simplicity of construction in both powerbanks.

Powerbanks use faraday’s law to charge the battery without additional forced use by humans. It works when you walk by a magnet moving up and down, while a second magnet which is damper pushes the magnet to the top. I designed two versions of this device. The first is an outside version for people who want a long trip (longer than 10 or 30 minutes). The device case is made in polycarbonate which is very strong plastic. The second version is for people on their way to work, who need to save the batteries in their smartphones recharge in fast moments. The second device case is made in aluminum; it has a more simple, elegant and pretty design than the first powerbank. The only disadvantage is that you should hold the device in a vertical position in order for faraday’s mechanism to work well (it should work in horizontal position too). I decided to put an element which corrects having both of the devices in a horizontal position — for example, hooking them onto a pocket in a backpack.

The target group are people who want to live more eco-friendly lifestyles, are looking for something simple to use, and don’t want to lose time charging powerbanks in the traditional way (connect to kontakt). My research process was simple. First I analyzed the solution we have now, and after I analyzed them and consulted with my professor, I chose the best solution. I developed this idea by traditional sketching on paper to find a good form, and made one simple experimental model to try to put a second magnet as a damper (pluses directed to themselves). I checked the way to find a solution that would charge batteries by farraday’s law without using additional human force. Later I used Rhino to make 3-D models to show more details in the case and inside of the devices.

Academy of Fine Arts in Warsaw,
Faculty of Design, Poland