A network of in-home bio-reactors used to grow algae, which can produce biofuel and bio-plastics 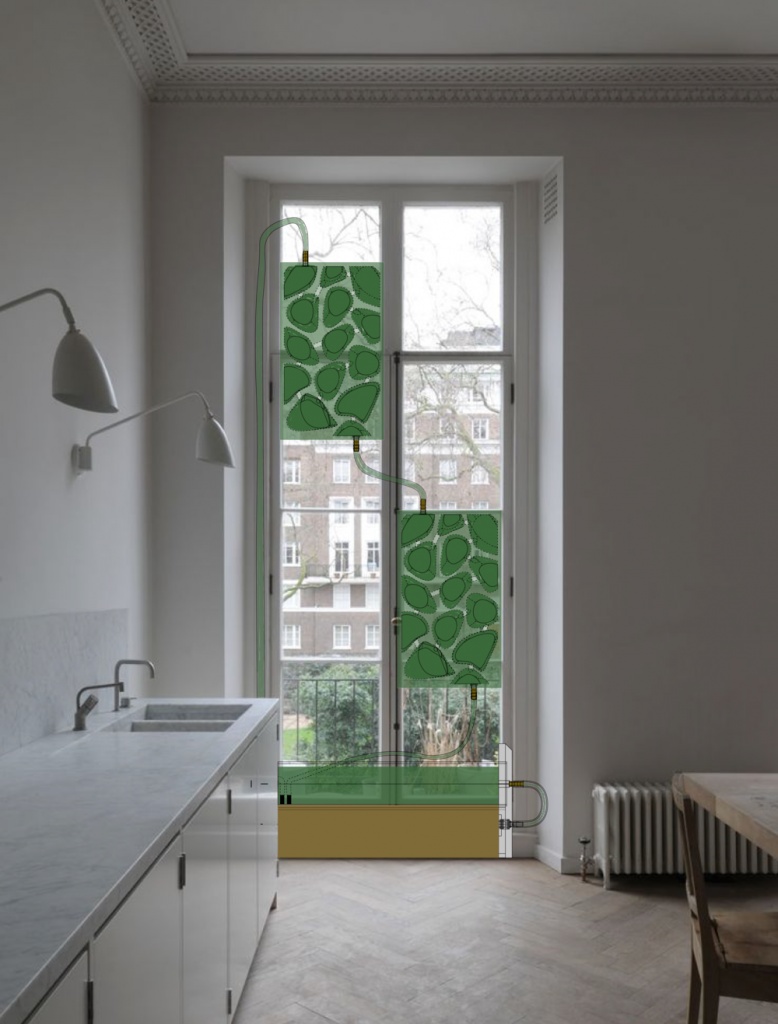 Bloom is a global network of bio-reactors that are integrated into the home. Through a series of home accessories, including window shades and sculptures, Bloom creates a bioreactor that is pleasing to the eye and functional. The product is composed of an algae-based 3d printed structure and two sheets of glass that connect to a larger reservoir at the base of the window. The algae that circulate through these sculptures use the inefficiencies of the window glass to its advantage, taking the heat and light energy that are not absorbed by the glass to grow and thrive. Bloom seeks to aid in the mass production of biofuel by producing a large enough yield of algae to reduce the gap in the production fields between fossil fuels and biofuels lessens, making algae-based biofuel a reality.

Bloom is mainly composed of an algae-based 3d printed structure and two sheets of glass. The sculptural 3d prints are inspired by natural structures and formations. The reactor is designed with the intention that it will be on display, making the appearance important. The window- mounted photo-bioreactors connect to a larger reservoir at the base of the window. The algae that circulate through these sculptures use the inefficiencies of the window glass to its advantage, taking the heat and light energy not absorbed by the glass and using it to grow and thrive.

Bloom originated as a product to disrupt the current fuel industry. As we have continued to work on the idea, we have begun to consider how Bloom could benefit from having a well-designed collection system. Although it could work by having owners bring their collected algae to centralized locations, having a service that picks up the algae production would add increased ease and appeal, allowing Bloom’s network to grow. And ultimately, we would love to see Bloom be a product implemented while designing systems. If we were to convert gas lines to biofuel, We could imagine skyscrapers lined with blooms plumbed to flow the length of the building and automated collection systems, that lead directly to processing centers and then back to the cities.

As we face a climate emergency, the need for green energy and materials is imminent. 2019 was the second warmest year in recorded history. As we continue to burn fossil fuels and release carbon into the air, the temperatures will continue to rise, and the effects of climate change become even more destructive. It is essential for the well-being of our planet that we stop burning fossil fuels and find a replacement.

Algae-based biofuel is currently being explored by scientists for its high lipid content, the fatty acids that are used to make crude oil, which is turned into biofuel. New advances in technology and research strive to take advantage of its potential. For example, The University of Utah recently presented the new “jet mixer” that makes the lipid extraction phase faster and more economical. Exxon Mobile’s research using Nannochloropsis, which has a lipid content of over 40%, has demonstrated that algae-biofuel could be a feasible alternative. With this in mind, we set out to create a way for people to become more involved in reducing carbon emissions by embracing the production of algae through objects in their homes.

Bloom is designed for the average household member, though it can be scaled for larger applications, including skyscrapers and garden sculptures. By installing small bioreactor units customized for the home, people can take part in growing their energy. The system is designed to grow and produce viable algae continuously. Bloom reactors are installed on or near windows. As algae grows, a homeowner drains the production, adds a water/fertilizer solution to the reservoir, and sends the collected algae to processing companies.

To illustrate how much fuel could potentially be produced from Bloom, here is an estimation. There are approximately 850,000 housing units in Manhattan. If each apartment has ten windows, Manhattan would have around 8.5 million windows from housing units alone. Multiplying the number of windows by the liters of algae that a Bloom system can hold (88.5 L) produces 752 million liters of algae from residential buildings alone. It takes around 1 million liters of algae to produce 40 thousand liters of fuel, so if an average car uses 975 liters per year, the fuel produced through Bloom in Manhattan would be enough to power fuel close to 24 thousand cars for an entire year. Although these numbers are just estimations for a small area, they are promising enough to give this idea an opportunity to succeed.

In this era of wasteful mindsets and a disposable culture, we as designers see the value in producing transformative work that addresses the current sustainability crisis. In order to continue doing what we love, designing, we understand that we have a responsibility to establish change in the way that our society produces and consumes. We were excited by the challenge that designing for a circular economy posed and we are incredibly appreciative of Cumulus Green for bringing attention and resources to designers like us to help solve these problems. We are honored that our design was so well-received and are eager to continue working and collaborating on Bloom.

Parsons School of Design at The New School, United States of America